Hi everyone! MIMI (mommy's mom) is here from Arizona!!!! She ADORES me and even took me to McDonalds for my belated birthday ice cream cone! 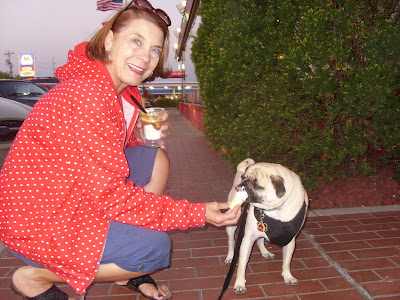 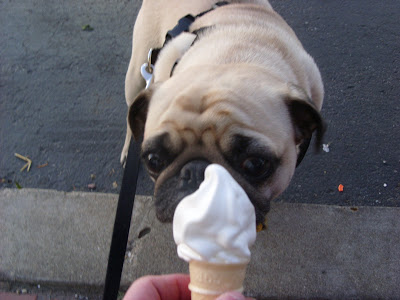 
Check out this video of me nom nom nomming my cone!!! 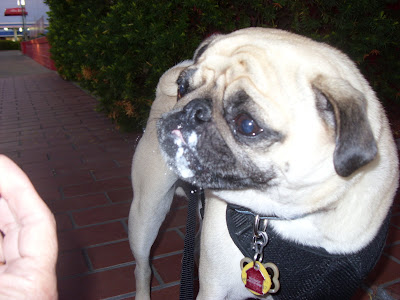 Oh well...the ice cream was TOTALLY worth a facewash!!! Thank you Mimi!

Mimi is flying in from AZ to see me today!!!!

Mom said that I was “ripe” and took me to PetSmart Day Spa to be “De-funkified”.
Here’s me BEFORE….

OH MY HELEN KELLER!!! I could hardly stand myself!!!

Luckily a really nice lady named Rachel thought I was cute and took really good care of me! She must not have a very good sense of smell…which is probably a good thing!
Here I am with Ms. Rachel AFTER….

Good thing Ms. Rachel thought I was cute…mom was afraid they’d send me down to the Fluff and Fold to have THESE two guys take care of me!!!!

WHOOHOO!!! The Red Wings finished off the Coyotes last night and advanced to round TWO of the playoffs!!!


The Goalie, Jimmy Howard was a WALL!!!


Mom, Dad, Holden and even Holden's friend Seth were all screaming for the Wings to win! We all had our Wings gear on and everyone rubbed my tummy for luck!

Do NOT call me "cute" during hockey playoffs!!! This is SERIOUS business my friends!!!


Next team we take on will be the San Jose Sharks (whaaat? Sharks SWIM...they don't SKATE!!!)


We understand that our blogger buddies Oakley and Swisher are Sharks fans...so I'm sure there will be some good old time hockey trash talking going on for the next 4 games (since mom is crossing her fingers for a SWEEP!)

Sunday morning started off nice and sunny, so Mom, Dad and Holden put me in the car and we took off...

We went to the Indy Motor Speedway (yes, where they drive the fast cars for the Indy 500!) for the annual MUTT STRUT!

As we were driving there...it started POURING down rain, but mom said that she came prepared!

Aw CRAP...I have to wear this farkakte RAINCOAT???


It was raining and really windy, so we didn't check out too many of the tents on the Plaza...but I INSISTED that mom stop and let me visit THIS one!!

They were really nice and gave mom a cool magnet when she told them that *I* was gay! How fabulous!!!


I met up with some of my PugBuddies....
Some of the PUG Posse was there (in their PUGwagon!)


My buddies Hank and Molly were there with Aunt Sarah (in their "DadGum Baby Buggy" as Hank calls it!)


There were a LOT of doggies there that we didn't know...here were some of our favorites...

Another cute Frenchie that rolled over for a TUMMY rub! (We forgot his name!)

These Huskies cracked us up...they all sat so nicely and POSED for a picture!! How in the Pug did their peeps get them to do that without the promise of a cheese buffet?

Some lucky dude named MAX got to ride on the track in THIS!

We walked the entire 2.5 mile track with Aunt Sarah, Hank and Molly. We were SOAKED!

Mom is shivering seeing this pic!

Holden pushed Molly in her stroller and she YAPPED the WHOLE TIME!!!

Holden's trying to figure out what O'Mally has her panties in a bunch about!

Here's a cool shot of Daddy and I

Here we are at the finish line (apparently these are the old original bricks from when the track was first built....it's a pretty big deal, or so we're told!)

Thanks for coming to the Mutt Strut with us!

Hopefully it won't be raining next year!

Yesterday (Saturday) was THE day! The annual Pug Sextuplets Birthday party and Family Reunion!!! All six littermates get together to celebrate our birthday (April 15) with our Pugparents, Gertie and Rufus! Of course all the peeps come along too!
Click HERE for last year's (2009) party and then again HERE for the year before (2008)

LET'S GET THIS PARTY STARTED!!!

Want to know how I got to be so cute and handsome???

Two of my brothers and one sister couldn't make it yesterday...but here's the line up of everyone that WAS there (you can click to biggify) 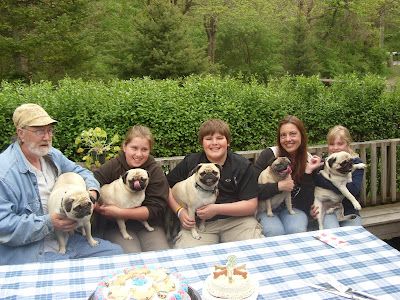 Starting on the left is my sister Betty, brother Bert, ME, My mommy Gertie and daddy Rufus!


There were a LOT of foodables for everyone!!! Andy (Gertie's human daddy) was the grillmaster!

Mom made this pupcake for us puggers...

...and she made this PEOPLE cake for the hoomans (it was a layer of chocolate and a layer of vanilla buttermilk!)

BLOW OUT THE FARKAKTE CANDLE SO WE CAN EAT ALREADY!!!


There was even ENTERTAINMENT!!! This Weiner guy named DOUG easily ate his weight in foodables....

We all laughed at the idea that he could eat a lot because he was so L O N G that it probably took a while for the food to travel to his other end! HAHAHAHAA


We had a look alike contest....I think my sister Betty and I won that!

Betty is with Mom and I'm down in front!

Can we go home so I can poop in my own yard please??? After all this partying...it's going to be supersized!!!
Posted by Salinger The Pug at 5:31 PM 19 comments:

I don't know why this video is so funny....Pugs are of Chinese heritage, just like Wonton soup...RIGHT????

Happy Soupy Saturday to all of you!
Posted by Salinger The Pug at 12:01 PM 10 comments:

TPIF (Thank Pug it's Friday!) everyone!!!!! Does everyone have big and fabulous plans for the weekend???

We have a few cool things to share today (all that happened in the past week).

First off....I celebrated Sexy Whipped Cream Sunday with a lot of others in the PugBlog community and went to Starbucks with mom and dad and got my PupCup and thought of our dear friend Penny.

This one's for you, girl!!!! We hope you're running like a crazyPug on the other side of that bridge!!!!

Mom called and asked if 4 legged children were allowed and the lady laughed and said "Policy says no, but EVERYONE does it, so come on in!"

I got to pick out tomato plants and some herbs for mom's herb garden!

"Let's go HOOOOME so we can make Caprese Salad!!!"

"Aw crap...what do you MEAN we have to grow them first? Sheesh!"


In other news...do you remember the post we did a while back about our fellow PugMom Friend ANNIE (Click here to refresh your memory...we'll wait!)

WELL.....you may remember this adorable BEFORE pic of Annie's belly with big PugBro Butch....

Seriously...don't you just want to smell her head????? Mom will post more pics in the coming weeks when we get to go meet her in person!

In honor of Earth Day today, we're going to borrow the short film made by our very own blogger buddy PUGLET!

Can you believe how SMART he is???? (Mom, on the other hand, is NOT so smart and can't figure out how to make this video fit our space, so just double click it to watch it and it will biggify)

After seeing this video, mom says that I really need to start doing more smart stuff like this to earn my kibble around here! (yeah, thanks a HEAP Puglet!)

GREAT video....and our buddy Stubby helped collaborate on it too! Be sure to check out both of their blogs (Puglet and Stubby) for more great info about being good to Mother Earth.

Mom says she is going to do her part today by not using water to do any laundry or dishes!!

Happy Earth Day!
Posted by Salinger The Pug at 7:59 AM 12 comments:

Labels: it's not easy being green

Check THIS out!!! Last Saturday...Mom and I were invited to a MIDNIGHT TEA PARTY for our friend Chelsea's 14th Birthday!!!! Here I am all dressed up in my birthday finery...


Mom cleaned up fairly ok too...

She was all hopped up on REGULAR Starbucks and Diet Coke to keep her awake. She says Midnight is WAAAY past her bedtime normally!


Look how pretty my buddy Maggie looked in her new pink sundress!!! It totally matched her tongue!

(Maggie is Chelsea's Pug for those of you that don't know!)

Mom's friend Dyan (Chelsea's mom) did SUCH a pretty job setting the table with her Grandmother's old fancy china!


The food was all dainty and pretty (just my style!)

The bigger cuppycake to the left was a BANANA PUPCAKE for Maggie and I!

Here is her mom Dyan (Mom's friend) bringing her a cupcake with a candle to blow out and make a wish!


Maggie and I had a LOT of fun playing and getting tastes of yummy things before we passed out on the rug!