I had the most exciting day yesterday! Mom and Holden took me to Mounds State Park to hike on the trails! The BEST part was that my PugMommy (Gertie) and my PugBrother (Bert) got to come with their people, Nancy (my mommy's friend) and her daughter Gracie (who has been friends with Holden since they were babies).

Here we are! All walking nicely together! Holden has Gertie, Nancy has Bert and Gracie has ME!

We saw LOTS of cool stuff! Mounds State Park is the site of an Indian Burial Ground. They had lots of fences up around anything we could have gotten into trouble for digging up!

We hiked down to the White River. Holden took some cool pictures!

We all posed for a group picture inside this cool shelter/bench/sculpture thing.

THEN we started the walk back to the car so we could have our picnic! THAT'S when things got interesting.......
FIRST off...Holden and Gracie aren't so much into the whole hiking thing. One would have believed they were near death because of their advanced stages of the following ailments (they were ALL mentioned at some point during the day)
1. Hunger
2. Thirst
3. EXTREME fatigue
4. Sore feet
5. REALLY sore feet
6. Possible bug bite
7. Fear of poison ivy
8. Twisted ankle
9. Hurt finger where a leash tugged
10. Doggie nail scratches
11. Lumbago (mom added this one for fun)
12. Gingivitis (Holden)
13. Erectile Dysfunction (Holden)...(remember...he's NINE)

Here are the Ailment Twins....Holden and Gracie. Oy Vay!

We Pugs fared very well for the most part. We got lots of water breaks and rest breaks and mom had to carry Gertie back to the car because she was REALLY snorting and people were staring at us.

"WHATCHU LOOKIN' AT? I'm brachycephalic...SUE ME!"

All in all, we had a really nice day and will probably go back VERY soon! Mom is a big fall foliage freak and it's getting to be that time of year here in the Midwest!

Hopefully Holden's gingivitis will be better so he can come with us! HAHAHA!

OH...thanks to NEVIS for giving us this award!

We're so excited! It's the coolest thing we've ever won aside from $5 from a scratch off lottery ticket! Thanks Nevis! Crap...I think we were supposed to change the name at the bottom (since she's Mancidote). Mom is tired and says it's ok this way and everyone knows she's a tech tard anyway.

Good night all!
STP
Posted by Salinger The Pug at 11:58 PM 5 comments:

Labels: Day at the park

Nothing much to report today, so we wanted to share this because it makes us laugh.....really hard! 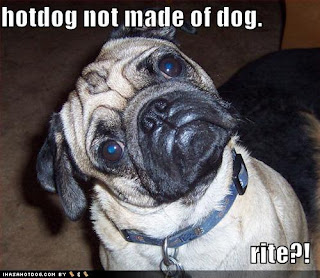 We love the LOL Dogz!

What the heck have we been doing?

Ok, nothing but the usual excuses as to why mom hasn't updated my blog in 2 weeks, but this time we had some REAL drama going on! Holden had a growth removed from the inside of his lower jaw/gumline! It's been bugging him for a while and the Oral Surgeon removed it and sent it off for pathology. THANKFULLY it turned out to be just a benign growth, but he had a few rough days with swelling and pain, which I was all too happy to help comfort!

Here's Holden looking all swollen on the left side of his face. Poor baby had a bunch of stitches and was all doped up on Darvocet!

Holden only missed one day of school, which was good because it was SPIRIT WEEK for Homecoming! Here we are together on Hat Day

Mom tried to put a hat on me too, but I hated it and tried to eat it.

I'm not in this picture, but mom likes it.....Holden's football team got to ride in an ARMY TRUCK for the Homecoming parade! My team got their faces all painted up with cammo and we had fun screaming, yelling and chucking candy at all the people along the parade route.

Labels: All about Holden

Hi everyone! Mom continues to be a big ol slacker and choose WORK over my blog (the NERVE of that woman!) but she did take a few cute snaps this morning while I was helping Holden wait for the bus!

What a cool outfit! VERY patriotic!

Holden's school declared today (the 7th anniversary of September 11th) as PATRIOTIC DAY and asked all the kids and teachers to wear red,white and blue. Holden looked quite festive, as did Maya and India...our neighbors across the street!

Mom is pretty much mentally challenged for the first hour she is awake, so she didn't even THINK of putting an outfit on ME! Nice!

Today is also Grandpa Conrad's birthday!!! He is 92 today (OMG...that's like 644 in dog years!!!). He was celebrating by going out to dinner to Texas Roadhouse (his favorite restaurant!) with his friends this evening. Here is a recent (taken 3 weeks ago) pic that was taken while mom and dad were in Michigan. I don't get to see Great Grandpa very often because he lives so far away, but I mailed him a card with a PUG on it that looked just like me, and I gave him a sloppy kiss over the phone this morning!

That's grandpa in the front next to Mimi (my grandma) then in the back is mommy (Laura) and daddy (Kevin).

Mom is still really busy with her buttkicking contest, so we'll share most of the highlights of our week in pictures!

As promised in our last post, here is a picture of Weiss, Payton's baby brother white Boxer! He is SO cute and mom says he looks like a baby lamb with his pink ears!

He's almost PUG sized, so Pugsley and I had fun playing with him the other day!

Here we are taking a break...that's Holden with me, then Weiss' brother Caden with Pugsley and Weiss with his sister Mikaela. We were SO TIRED!

Mom gave me a bath this week (because I NEEDED it!) and then I got FURMINATED again!

Just LOOK at the pile she got out after only about five minutes!

BUT...the BEST news of all for this week was my GRADUATION from the PetSmart Advanced Training Class!!! Mom helped me study hard all week and I did a really good job on my final exam and did my long "sit stay" and long "down stay" and I did really well with heeling too! Mom was SO proud of me tonight!

Tomorrow is Holden's first football game of the season and I have very important mascot duties during it! I must get to bed now so I can be rested for the big game!

Good night and have a great weekend everyone!