Holden went to the Orthopedist today and he is going to be juuuuuust fine! 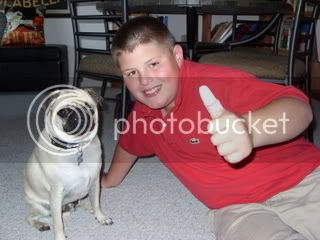 The doctor said that Holden BROKE his thumb right along the growth plate, but that it was in good alignment and should heal with no problem and not affect his growth at all. He was given the all clear to golf on Monday, but said that he's only allowed to do the conditioning and basics at football camp...so "Mack" (that's Brother's football nickname)will have to wait until the season starts to lay the smackdown on!

He got this cool new splint that is much more comfortable than the one that the Doc-In-The-Box Jacklegs gave him! He'll have it for at least three weeks, but it's much nicer to kiss. 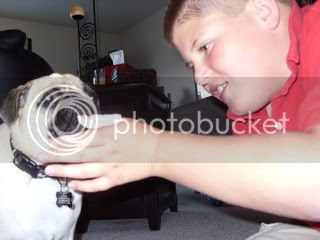 
**MOM'S NOTE** I fogot to mention that Dr. Ortho set me straight yesterday and explained that where bones are concerned...a break is a break. When I said to him "I thought it was just fractured!" he kind of gave me a nice "duh" reply and said somethting to the effect of fractured=broken (either bones are intact or they're not). Hmmmm....interesting. I always thought there was a difference. I told Holden to milk it because BROKE sounds so much more serious than FRACTURED! ;-)
Posted by Salinger The Pug at 5:27 PM

Oh, we are soooooo happy for you Holden. At least you will not miss football camp altogether.

We're so happy for Holden! He seems to be pretty happy about that new splint!

Love ya lots,
Maggie and Mitch

Yay!! :) I think the dr's use fractured when the break is a nice clean simple break.. :p
my brother had the lovely experience of breaking one wrist on a school ski trip and then 2 weeks before the cast was to come off, broke the other rollerblading!! The dr was nice and he only had to wear the 2 casts together for one week! (yes he does have wrist guards and yes when my mom isn't looking, he takes them off! he was 13 i think at them time!!)

great news! how cool that he can still go to both camps! holden's new brace looks so much more comfortable. what a relief!
xo
melissa

hi salinger!
OMG! your entry this week was toooo funny! it had me shaking with laughter. this final 4 competition is fierce!
have a wonderful 4th!
xo
melissa